Cisco is further extending the reach of its Application Centric Infrastructure (ACI) -based application-centric infrastructure technology, which enables customers to develop and control hybrid, multicloud, and SD-WAN environments. As a Cisco reference solution for software-defined data center (SDN) networks, ACI also delivers the Intent-Based Networking (IBN) technology that automatically implements network and policy configuration changes on the fly and ensures the delivery of the data. To extend the reach of its Application-Oriented Infrastructure (ACI) technology, Cisco has implemented a program and technology known as ACI Anywhere. 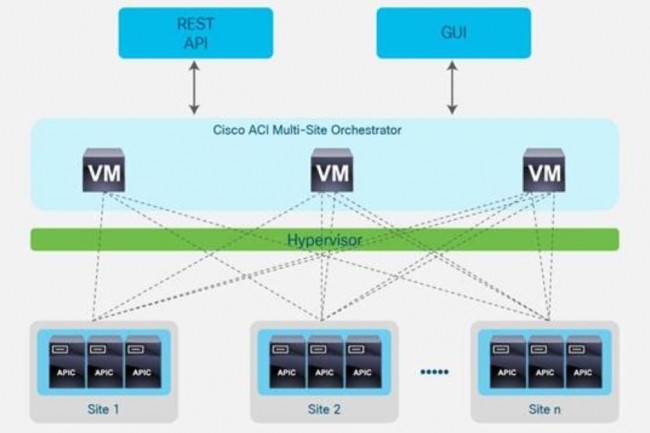 “For example, ACI Anywhere allows policies configured through the Cisco SDN Application Policy Infrastructure Controller (APIC) to use the native APIs of a public cloud provider to orchestrate changes in private and public cloud environments,” he said. Cisco. The Orchestrator facilitates provisioning and implementation management across multiple sites and services. “This approach enables consistent policy and automation across an established ACI interface without compromising performance or preventing access to the many native public cloud services available. In addition, Cisco on-premise ACI delivers a consistent hybrid cloud experience and a good balance between flexibility and control.

The ability to integrate Microsoft Azure Clouds and a cloud-only ACI implementation are some of the important developments in ACI Anywhere. Cisco worked closely with Microsoft, and earlier this year, as the company delivered preview support for the Azure cloud, it also added Azure Kubernetes Service (AKS) to managed services that seamlessly integrate with Cisco Container Platform. “With the Azure cloud extension, the service uses Cisco Cloud APIC, which runs natively in the Azure public cloud to provide automated connectivity, policy translation, and improved visibility of workloads into the public cloud,” he said. Cisco. According to the equipment manufacturer, with the new Azure extensions,

Another new extension is for ACI Anywhere cloud support. “Essentially, ACI Multicloud implements ACI Anywhere components in a public cloud. It’s for customers who want to get started in cloud-first and may not have implemented an ACI on-premise but want to implement secure connectivity and segment workloads in public clouds. ” said Srini Kotamraju again. “At the moment, ACI Multicloud is working with Azure and AWS cloud services, but other services will be added later,” she said.

The latest addition to ACI is the addition of SD-WAN WAN support to the system. “This integration allows customers to automate WAN path selection between branch and on-premise datacenter based on application policy,” Kotamraju said. The package also incorporates Viptela’s SD-WAN technology, a company acquired by Cisco two years ago. “The main goal is to provide the best possible connectivity to customers in remote branches,” said Srini Kotamraju. “The integration between ACI and Viptela SD-WAN enables Cisco customers to improve the quality of the remote branch experience,” said Lee Doyle.

ACI Anywhere updates – now all available – are just one aspect of the many hybrid cloud partnerships announced by Cisco this year. For example, in June, Cisco and IBM said they would merge their cloud and datacenter technologies to enable their customers to more easily and securely develop and support on-premise and hybrid applications. Cisco, IBM Cloud, and IBM Global Technology Services, IBM’s professional services industry, said they would jointly develop a hybrid cloud architecture that integrates the Cisco datacenter, network, and analytics platforms with offerings. IBM clouds.

Cisco has already stated that customers deploying its Virtual Application Centric Infrastructure (ACI) technologies can now extend this network fabric from their site to the IBM cloud. The Cisco ACI Software-Defined Networking (SDN) Datacenter Pack also includes the company’s Intent-Based Networking technology, which allows customers to automatically implement network and policy changes on the fly and to ensure that the network is up and running. delivery of data. As for IBM, the company said that Cisco’s ACI Virtual Pod (vPOD) software could now run on bare-metal servers in the IBM cloud. “VPOD consists of a set of virtual Spines and Leafs and supports up to eight ACI Virtual Edge instances.

In April, Cisco delivered the Cloud ACI for AWS service. According to Cisco, this service allows “users to configure cross-site connectivity, define policies, and monitor the health of the network infrastructure in hybrid environments.” “Like the Azure extensions, the AWS service uses the Cisco Cloud APIC to provide connectivity, policy translation, and visibility into the public cloud,” said Cisco. “This solution provides access to a suite of features that transform an on-premise datacenter into a true multi-cloud architecture, contributing to policy and operational consistency, regardless of where applications or data reside. It uses native media

Also in April, Cisco and Google extended their joint cloud development activities to make it easier for customers to build secure multi-cloud and hybrid applications wherever they want, from on-premise data centers to public clouds. This expansion involves Google’s new open-source hybrid pack, Anthos, based on the beta version of Google Cloud Service, which it replaces. Anthos will allow its customers to run unmodified applications on existing on-premise hardware or in the public cloud. “Anthos will be available on the Google Cloud Platform (GCP) with Google Kubernetes Engine (GKE), and in datacenters with GKE On-Prem,” the company said. ” For the first time,

For its part, Cisco announced support for Anthos and promised to integrate it closely with Cisco’s datacenter technologies, including its hyperconverged HyperFlex pack, but also with ACI, SD-WAN and Stealthwatch Cloud. “The integrations will provide a consistent, cloud-like experience, whether on-premise or in the cloud, and will benefit from automatic upgrades to the latest security releases and patches,” said Cisco.